File is $12.00 This is a great arrangement that Andy Park did.  Done as if WURLITZER would have arranged it in the late 1920's.  It was a good tune as a pop Abba tune, but this version takes it to new heights!

We've just received word that virtuoso band organ arranger Rich Olsen (who often went by the pseudonym Richie Poor) has passed away. Although the cause of death is not yet known, Rich had been having health issues for quite some time now. 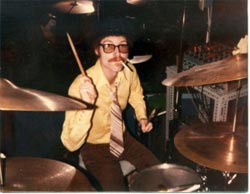 I would like to say that I will miss my best friend Rich Olsen. It was a big shock to me when I heard that he had passed away. He has done a lot for me in the seven years I knew him. I first contacted him by phone Thanksgiving Day 2007. When I told him who I was and what I needed from him, he said that he had never arranged in the Style 150 at all but would love to take a shot of it. So I said, "OK, how about I give you a song to do and see how you do with it?" The next day I checked my email and found his MP-3 arrangement of "On the Sunny Side of the Street. "When I played it, I could not believe it at all. I was so happy with his arranging skill that I phoned him and said, "You are hired. I want to do a special band organ roll called 'Big Band Swing Roll'". And it came out so good that it hit the top of the roll sales in 2007-2008. To date we have sold around 150 copies of that roll.

That's how I got to knew Rich and what a nice guy he was. We started to make other band organ rolls. People wanted his music, and I was happy to sell his music for him. I was happy to help band organ fans out, so that they can keep playing new music on their organs. I hope we still can keep doing this today. I know Rich would like us to keep this going for him. I know no one could ever match the Rich Olsen style, but everyone has his own arranging ideas. I also thought of Rich as my father because he was there when I needed him, and he helped me out with things that I needed, like writing letters. I knew that he was having some health problems, but did not realize they were that bad. But now he is with my father in heaven, looking down at me and still helping me out with this work. I never got the chance to travel to California to meet him or John Malone. I was planning a trip there this year, but now it is too late.

Rich, I will miss you always. I will never forget you. You are in my heart and always will be.

Thank you for seven years of service to me and my company. I will try my best to keep this going for you, and I will see you soon on the carousel.